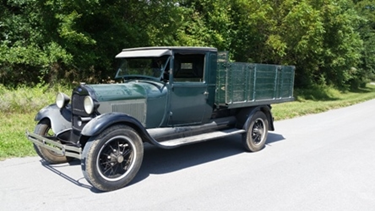 Truck is for sale but currently on exhibit at Kansas Auto Museum. Extremely Rare 1929 Museum Quality Ford Model AA Dump Truck. An extremely fine example of a well preserved collectible that will likely not be seen again. It was part of the Harrah's Museum collection and held in a private collections only to appear available here briefly and then probably will disappear again forever becoming unobtainable. This truck is equipped with a hydraulic dump, wood and stake bed "grain bed". You will note the rare "B" on the rear knuckle, denoting the earmarks of the highly sought after factory 4 speed transmission. This AA hand cranks with ease, runs, drives in all 4 gears plus reverse and brakes remarkably well. The cab floor pictured was sitting in the rear grain bed at the time of purchase so its interior hydraulic lever was disconnected at purchase. The floor was believed pulled up to access the battery. Consequently, the trucks hydraulic bed will be remain disconnected and a new owner can be the first to pull that lever in most likely many, many decades!

Galion and Wood Mfg. Co. built all of the dump bodies offered by Ford on their heavy-duty AA and BB chassis during the 1930s. Galion (now Galion Godwin Truck Body Co.) is the oldest known truck body manufacturer still in operation today. This may very well be the first Ford dump truck ever made, and as a prototype, as the hydraulic dump was unavailable until the 1930 Ford model year.

Finally, the floor, bed and dust as shown were as the car was obtained. The floor will be replaced into the cab but the dust as found remains on this fine truck in the gallery. Authenticity is well demonstrated with amazing period paint and patina and virtually no deterioration. The passenger side mirror as shown in the pics has gone missing since photos were taken.

Certainly not an after thought is the wood bed. As this was no doubt 1st cutting lumber (trees were hundreds of years old before harvesting) and the truck itself is nearly 90 years old, and the condition of this bed is breathtaking in what is likely three centuries old wood.