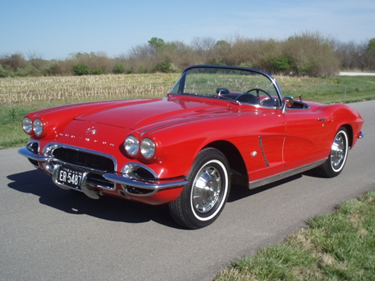 MOVING SO PRICE JUST REDUCED!
VIN # 238!
POWER WINDOWS
This is not just a numbers matching 1962 Corvette! You will really enjoy reading this brief summation of this very exciting car! Corvette's June 26, 1960 world spectacle debut at France's brutally famous 24-Hour La Mans finished Corvette extremely impressively, behind only long-standing racers Ferrari and Aston Martin. The 1960 race revealed just how close GM came to the perfect balance between weight and power for the stamina required in the 24 hour proving ground race. GM immediately got to work and shortly thereafter, GM revealed a new motor, the now legendary 327 engine and it was first introduced in the 1962 Corvette model year, still argued the best Small Block Engine (SBE) ever made. While millions of 327's were made in years to follow, this 1962 Corvette VIN ....00238, means this is 238th Corvette made for the year 1962 (made in summer 1961). The engine casting date July 5, 1961 makes this one of the earliest known 327 engines on the planet! As history would prove, the 327 certainly was the perfect game-changing mate to launch the 1962 Corvette's 3,000 pound chassis off the line, on the circle and over the high-RPM long haul. This new engine proved so perfectly engineered for the car that it was no surprise the following model year of 1963, GM completely redesigned the actual car to around this new 327 engine, calling that Corvette the "Stingray".

The 3269 AFB carb sporting the super early 1466 code and the correct August 1961 dating pairs it to the very early VIN build date. This car's 1466 logo on the carb will be featured in the NCRS judging manual as no pic had existed until one on the car was sent in. The numbers matching engine pad on the engine shows it to be an RD coded 300HP car. The vintage, the history and the condition make this an exceptional example of the car that caused the Corvette to gain its race worthy heritage, now firmly established but handed down from the 327 engine that changed the brand in the summer of 1961.

Don't pass this one up if this is your dream car. It is a very Nice Texas Car with the bottom side is as nice as the top. Prior owner was a collector who spent a great deal of money and effort putting this through a very expensive and extensive restoration. Not a car with photographic edits to heavily try to sell the car.

"Let me know what I can do to help you put this in your garage such as help with financing or shipping worldwide.

Thanks for Looking! Daniel Rechtfertig"

ADDITIONAL PICS AT HIGHER RESOLUTION MAY BE SEEN AT WWW.CLASSICAUTOROD.COM

PLEASE LET ME KNOW IF YOU NEED HELP WITH SHIPPING OR FINANCING. WITH GOOD CREDIT, USUALLY 10% DOWN IS TYPICALLY NEEDED TO OBTAIN UP TO A 10 YEAR TERM AT LOW RATES. THANKS!

Now for the legal stuff: Classic Auto Rod, LLC is located at 1000 SE Blue Parkway in Lee's Summit, MO 64063. The vehicle being offered here is sold in "As Is" Condition with no express or implied warranties.